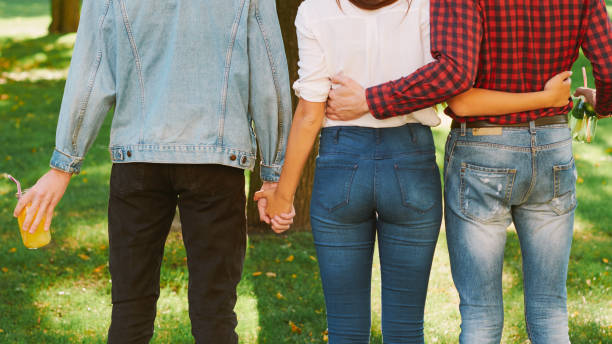 Throuples on the rise everywhere, globally. But let’s first discover what it means to be a throuple. It’s a long term committed relationship between three people where everyone agrees. This goes beyond simple threesomes. Though, throuples seem like a desirable dream according to current trends. But, they are some loop holes to them. They crushingly fail for a number of reasons. One of the members might feel left out, or any one of them can get jealous, or two people grow more closer without the third. What’s needed most in throuple relationships are two most important things: communication and honesty.

In popular culture with, “The Politician” and “The Real Housewives of Beverly Hills”, people have started questioning the status quo when it comes to traditional relationships. People are realizing that they can create their own rules and lead a prosperous non-traditional relationship. Tut-tutting and constant pestering of society and it’s norms has crumbled the world for many. And, now communities are realizing that being queer is about more love, not less.

The more inclusive dating apps have played a major role in changing attitudes of society. They have a become a driving force for rise of throuples and polyamorous relationships. According to Feeld, a poly and kink dating app, 60% of couples are looking for a third. The three-way app, 3Fun surveyed their users in UK and US and found that 43% of those looking for threesomes were also looking for three-way relationship. Currently, people have been experimenting a way to get into a successful throuple relationship. First, the start dating couples, by dating a man and a woman at the same time (essentially becoming a ‘Unicorn’). Once they are comfortable with the dynamics of third wheeling. They start venturing into three-way relationships with much more ease.

Let’s try to understand ‘Unicorns’ first. A Unicorn is a person who likes to be or is asked to be third in an already established 2 people relationship. Most times they are just one off threeways, but sometimes they turn into polyamorous relationships. However, unicorns are not exclusive to singular throuple relationships. Such polyamorous queer relationships are not only budding in UK and US, but all over the globe. Spread of Covid-19, has enhanced global networks and groups for those who are involved in ethical throuples. Getting recognition from governments and society in general is going to give people more options for designing the type of relationship that’s crucial for them. But, non-monogamous and queer relationships still carry a stigma with them. People receive anonymous hate mail, homophobic bullying, and overall discrimination. Hence it’s important for people to use queer positive dating apps and communities for support.

In London (The UK), there are quite a few throuple friendly places. There’s a restaurant named “Throuple” in Shoreditch (a first of it’s kind polyamorous eatery). There are various discord servers tagged with polyamory – Disboard. Also, designers and architects are getting into this space. Scott Whitby Studio in London has designed a Tri-Pod (a bedroom specially made for throuples). Such initiatives will surely help queer lose it’s stigma in the coming years.